Email ThisBlogThis!Share to TwitterShare to FacebookShare to Pinterest
Alright, so having recently acquired Yellow & Yangtze I'm now getting all reinvigorated for the Tigris & Euphrates-style gameplay.

What if there was another two rivers themed game that uses the same mechanics but comes in much more condensed package - both in terms of components and overall game time. The Rhine and Rhone rivers have a nice ring to them, and are both rivers in relatively close proximity in Europe. Both played an important role throughout EU history and interestingly both have their headwaters up in the Swiss Alps but on opposite sides of the continental divide. The Rhine heads north into the North Sea, and the Rhone goes south into the Mediterranean.

Mechanically, to keep things small (and especially the game box) I'd use the "Micro Cards" (1.25" x 1.75" cards from GameCrafter) instead of tiles. Likewise, I'd dispense entirely with the need for a board. Instead, you would set up a 9x9 hex-grid of cards like in the image below. You'd have a set of fixed "River" cards for the Rhine & Rhone to form the basic layout of the map, with spots for the initial Black tiles (like in Y&Y). All the other cards would be face down. When you place new a tile/card, you'd take the face down card and add it to the top of the draw stack. 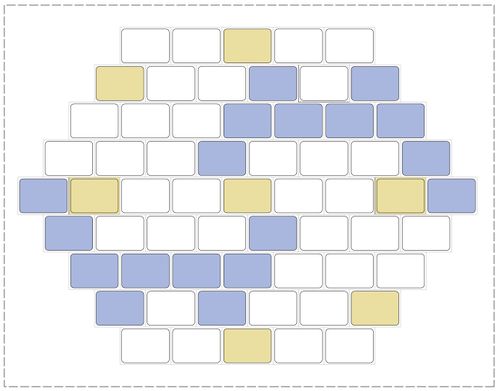 One interesting thing is that with using cards to build the board, you could potentially have many different game setups recommended in the rules and/or a process for building out your own unique board each time you play. Interesting?

As for the suits/tile colors, the following make sense to me...

Players would have a leader cards corresponding to those colors with a unique symbol and/or a special unique shaped/color pawn to mark the leader card as belonging to them. Alternatively, since the board is so much more cramped, I was thinking that leaders might actually just be placed ONTOP of a tile/card, so long as it's placed on or next to a Clergy tile, consistent with leaders needing to be next to red in T&E or black in Y&Y tiles.

All of this leaves the question of what mechanics to pull from across T&E and Y&Y to round this out. My sense is that it's mostly pulling from Y&Y since the gameplay is a little more straightforward.

However, for simplicity I'm ditching the yellow/wild tiles and leader, and instead adding back in the initial "treasures" that start on Clergy tiles like in T&E. Connecting two treasures together allows you to claim one if you have a merchant leader in the kingdom. Treasures count as a wild and the game ends when all the treasures have been taken (or all but 1).

I'm thinking monuments work like in Y&Y - but possibly also are dual colored. Not sure about that yet. Thematically, I was thinking that getting a triangle of 3 cards and would represent founding a "city", which would have a primary color plus another color to it.

Lastly, in terms of scoring, I was thinking of using a very small board with a Ingenious style OPEN scoring system. Basically, there would be 4 tracks for all the resources and players would have a cube in their color (yes, probably need to assign a different color token to each player, e.g. purple/yellow/black/orange or something) to track points earned. There could also be a victory trigger where the first player to get say "9 points" in their lowest color wins.

Thoughts about all of this? I'm kinda excited about the idea of it!