Email ThisBlogThis!Share to TwitterShare to FacebookShare to Pinterest
Warning: This is going to be a meandering post on a topic I’m struggling to wrap my brain around. The intent of my fumbling is to trigger a discussion on the topic at hand, and thus better illuminate the subject and my own understanding. Let’s see if I’m successful. 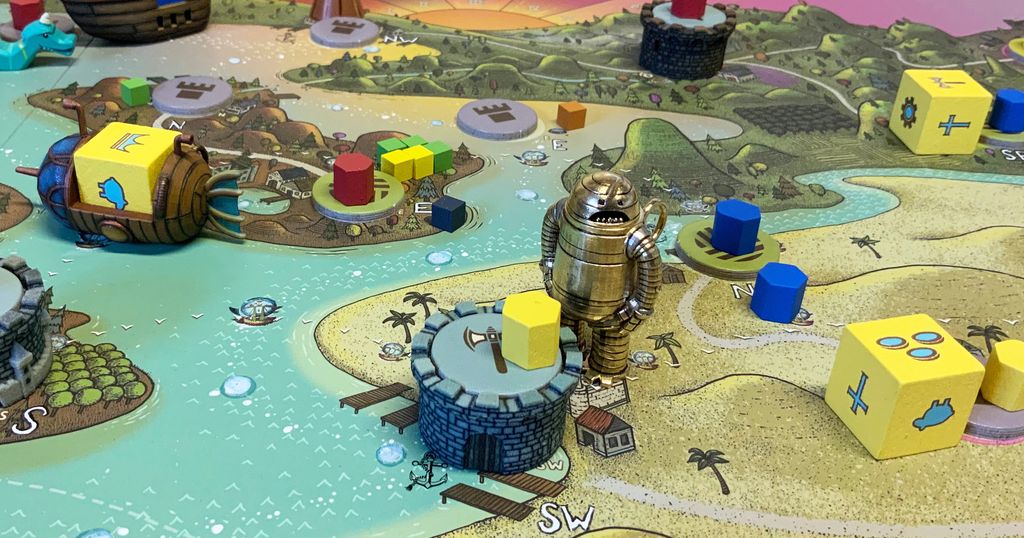 Over the past few years I’m finding myself increasingly drawn to games that I have affectionately started to describe as “beautiful messes” to my compadres. A game that is a beautiful mess, in my mind, is one that dispenses with some portion of conventional gaming wisdom in order to do something strange, unusual, and often viewed as imperfect - and often results in a very different feeling experience.

These “beautiful messes” are often the result of unorthodox mechanics, frequently with rough edges and clunky or nuanced rules thrown in for thematic richness. More importantly, these messy rules create a “beautiful mess” out of the strategic or tactical game state as well, where they enable an often a dizzying array of emergent interactions, dynamics, and overlapping lines of play to all operate at once. These are the sorts of games where you setup it up players look at each other across the table and declare as one, “what in the heck are we supposed to do now?” 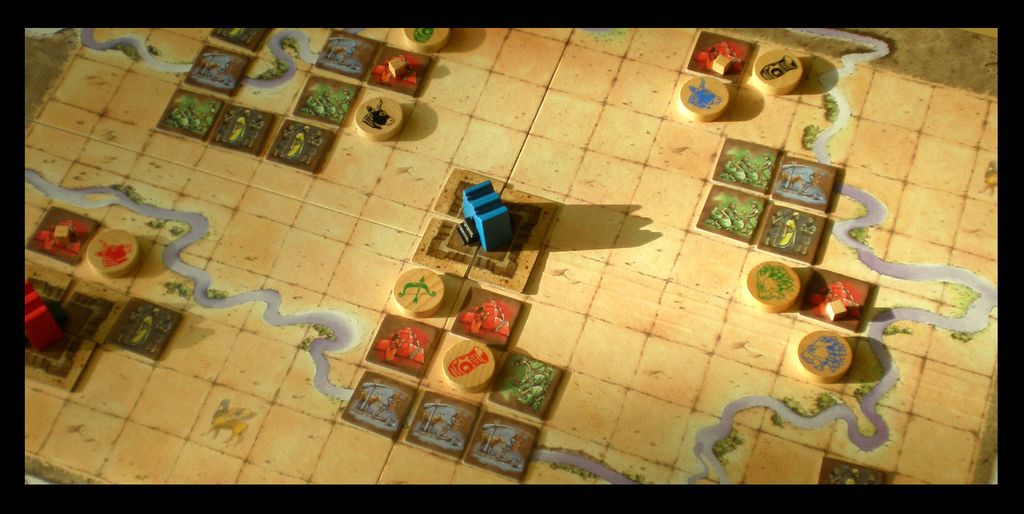 Let me pull in a few others angles on this topic. The geeklist What We Talk About When We Talk About Frameworks, way back in 2012, relates to these sorts of games. The geeklist was looking to describe and discuss Framework games, or games that had the players building a framework through play that shaped the topology (i.e. the lay of the land) of a shared strategic space. These games were generally seen as having the following characteristics:

(1) Direct player interaction (often through a primary shared space)
(2) Parasitism (i.e. ability to leech off other players’ assets or built entities)
(3) Constantly shifting incentives (i.e. the valuations of things are regularly in flux)
(4) Simple rules (but often hard to initially grok)
(5) Different ways to win but not multiple paths to victory (i.e. no pre-baked pathways)

Raveros summed it up well: Depth emerges because of creative play within the system. These framework games are perhaps oriented around the notion of emergence more so than other types of games. The designer provides this broad, flexible framework and the players are left to their own devices to build out the play space in a collective manner while nevertheless jockeying for the top position.

In no particular order, some of the Geeklist’s top candidates (one’s I’m slightly familiar with) for framework games include: 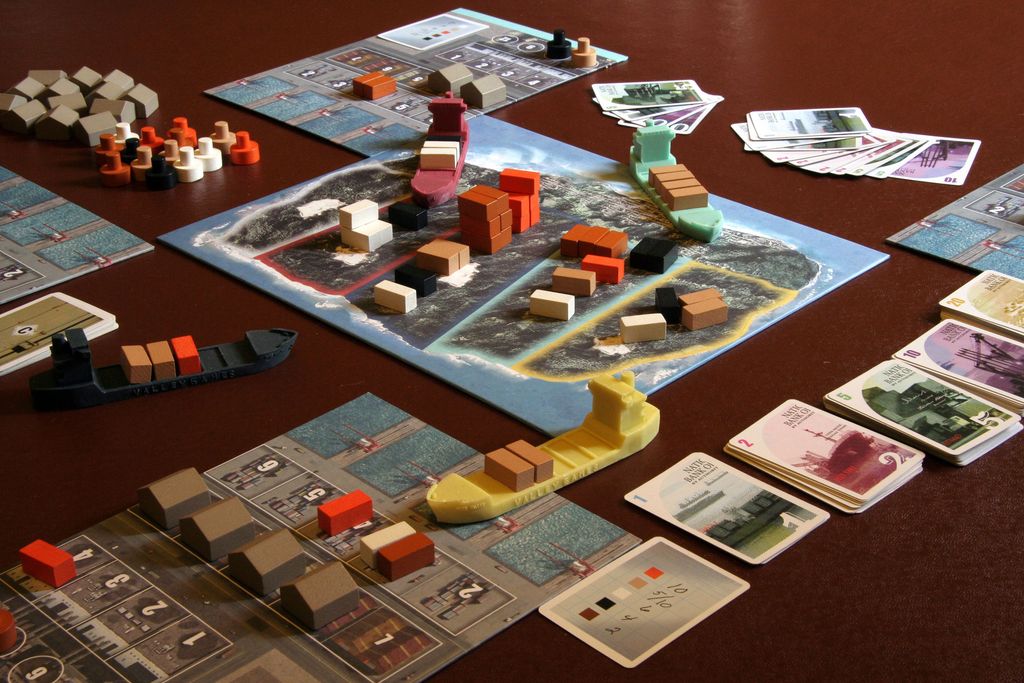 This is a really interesting list of games. A thread that runs through them is that players are either building a spatial arrangement of assets on a shared board, and that these assets are not completely and exclusively controlled by a single player (hence open-door for parasitism) and/or players are building a shared market (e.g. modern art or container) or other interactive space (e.g. web of alliances). In most all of these games, the decision spaces created tend to be quite large and thus give players a lot of latitude to exercise creative strategic thinking. There is little hand-holding and bad planning can lead to utter ruin. Conversely, threading the needle and executing a clever and brilliant strategy can let you steal and unexpected victory. I love this sort of thing.

Looking at the list above, I do see a slight dividing line between significantly simpler games mechanically (e.g. Modern Art or Bohnanza) versus more complex games (e.g. Pax series, Splotter Games, 18xx). The simpler games appear to fall under the older “German game” umbrella - where the thrust of the games’ conceit is around player engagement and interaction in shared spaces. When the complexity gets cranked up to higher levels, you get a sort of German game on steroids effect. These feel very different than medium or heavy weight eurogames - which aren’t built on this same framework concept at all (they are more about puzzle solving and optimization in a lower interaction environment). 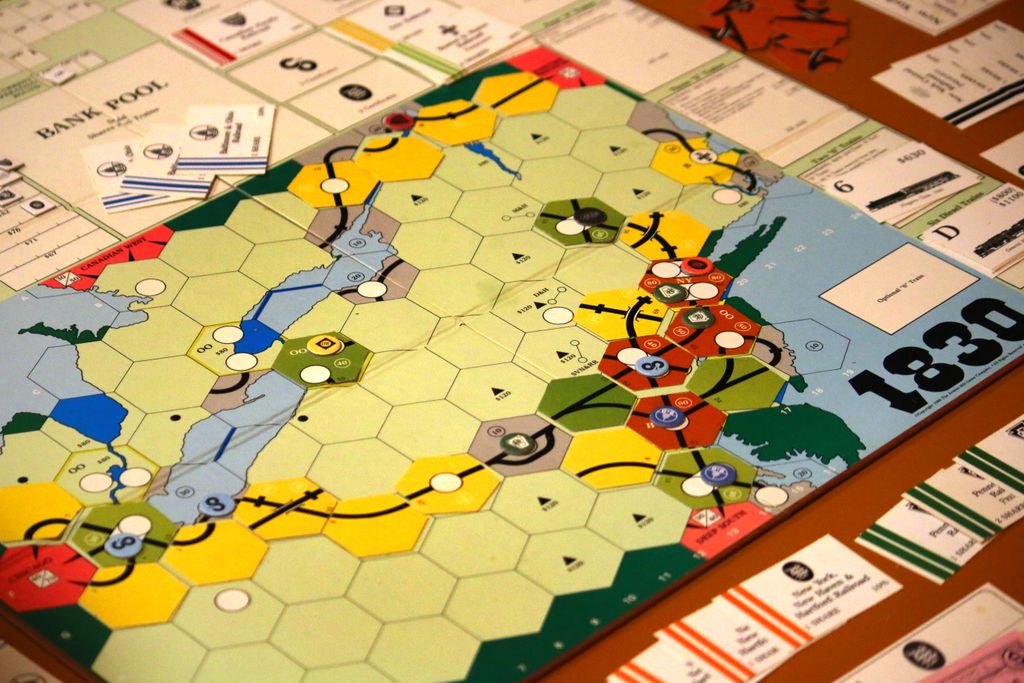 In many ways, this post is also reviving a discussion I had with Nate Straight following his excellent Empire Builder and the Modern Train Game blog post (also many years ago). In discussing train games and their unique economics, our conversation swung around to many of the same games on the list above. Many of these were described as “freak” cases where it wasn’t easy to pin down exactly what the game was trying to achieve from a design standpoint. Was it an economic game or something else?

Ultimately, my impetus for writing this post was set in motion by a line of discussion in a geeklist, starting here, that was talking about how 18xx and other economic games fit into the broader School of Design idea. Such games, alongside other hard to place designs (i.e. Pax series), are frequently uttered in the same breath under the “framework” game notion. And so, as a working definition for this design school, we landed on this:

The first is that I’m interested in how or if the notion of a “sandbox” game fits into the framework game idea. When I think of sandbox games, at least in the videogame space, it often relates to games that provide a huge kit of parts and the player is left to their devices to make of it what they will. In this regard, it shares the same core as framework games in that players are “building” something that everyone collectively engages with.

However, sandbox games tend to be less formally structured as competitive games (think Minecraft) in the video game space, and are often more about exploring a big open world. In board game terms, this might lead to something more cooperative and/or adventure in nature. But I don’t think it has to be that way. Is Container an economic sandbox of sorts? What about a game like Innovation that gives you scores of cards to play with? I’ve seen sandbox games described as “no single clear path to victory” and/or where “winning” isn’t the goal so much as taking actions seeing where it leads. The games are, perhaps, more about emergent narrative building than they are a competitive affair. 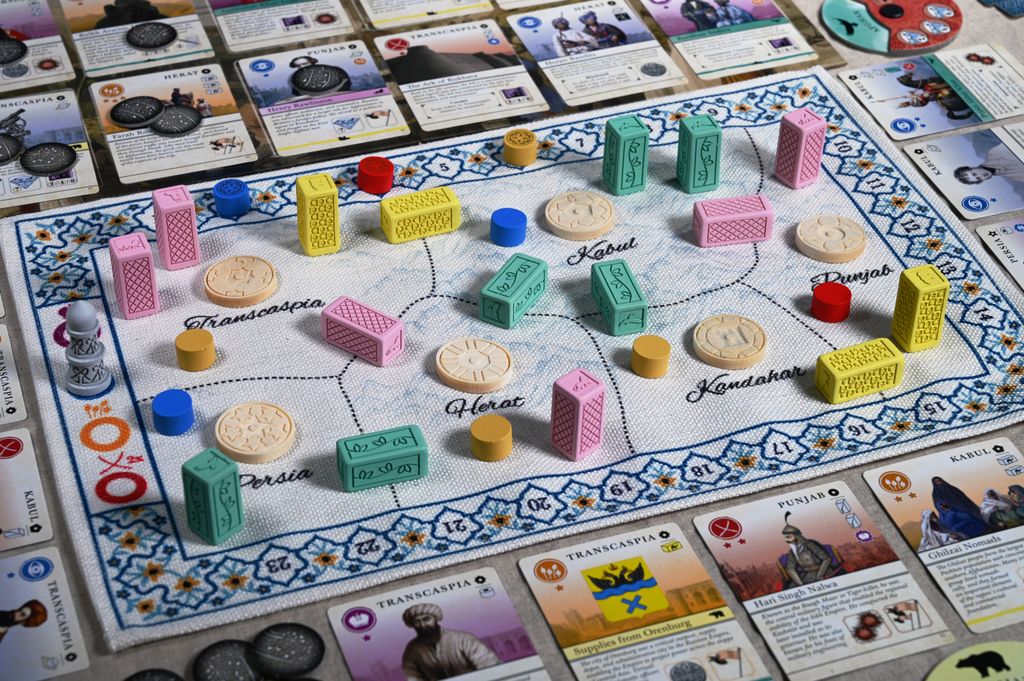 A few other games that come to mind along these lines includes Archipelago, Xia: Legends of a Drift System, Feudum, Mage Knight, Talisman. TedW had this set of criteria to consider, which might shed some light on this notion:

TedW wrote:
You might be a sandbox game if:
- The game is open ended
- You have an enormous number of assets (cards, technologies, attributes, etc) you can combine in a guhjillion ways
- The game is more about exploring the system than beating your opponent
- In any given came, you only use a fraction of the components.
- You have tremendous freedom in how you play the game
- It is epic in scope
- You can play the game 20 times and have 20 completely unique experiences.
Check out Sierra Madre games like: High Frontier (Third Edition), Bios: Megafauna (Second Edition), Pax Porfiriana, Origins: How We Became Human.


Some of the above overlaps extensively with how framework games operate. Pax Renaissance, for example, feels as much a framework game for building a shared board space as it does in being a sandbox per the criteria above. Many of the games discussed here, Splotter games, Sierra Madre games seem to overlap to an interesting degree. I’d also toss Study in Emerald into the mix as a sandbox, given the plethora of card options and dynamics that emerge. That said, I don’t think every framework game is a sandbox game, nor every sandbox a framework. But they seem to share much of the same DNA and both styles seem to promote this notion of emergence. And both are frequently big beautiful messes.

In some respects, I feel like the big beautiful messes discussed here, whether a framework game or a sandbox game or some hybrid of the two, are the avant-garde in game design. These are games, particularly the more complex ones, that push at the edges of typical game design norms and orthodox. They aren’t euro optimization puzzles, they aren’t wargames, they aren’t thematic straightforward dudes on a map games, they aren’t always family-friendly. They are crunchy and weird. They can be economic or geo-political in nature. But they take any of the above and twist it into something different and strange and messy. 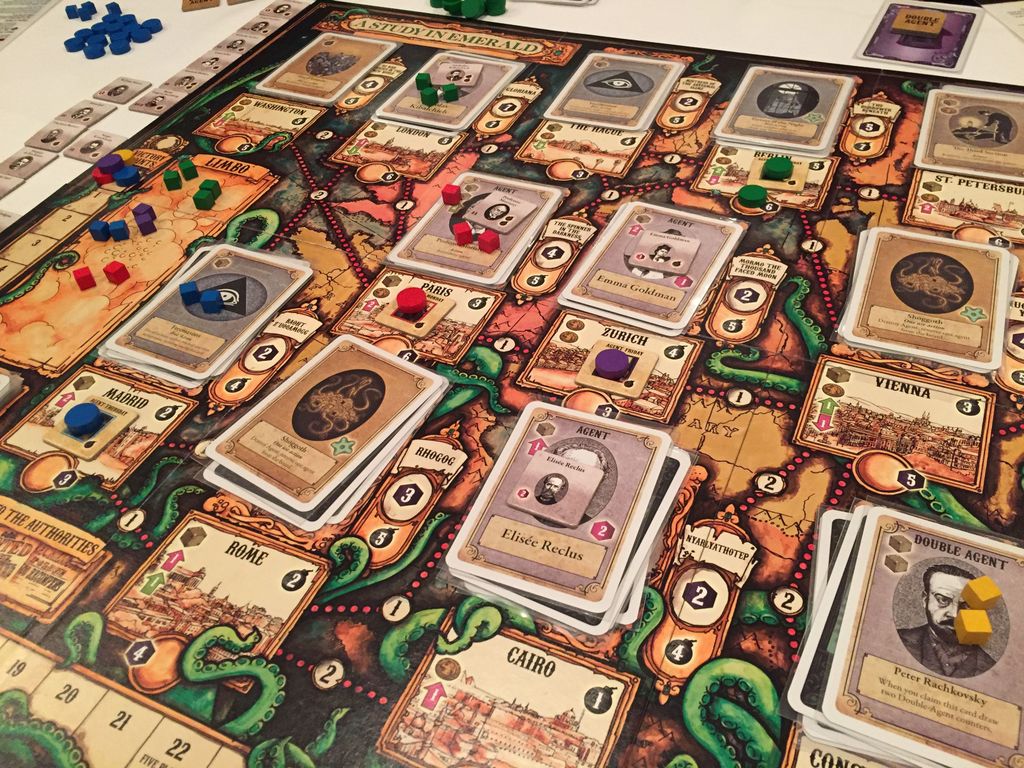 I’ve played A Study in Emerald (first edition only!) a few more times recently. I LOVE that there is a pile of wooden zombie meeples in the game with about a half-page of rules describing their use and associated victory trigger, all contingent on drawing and using one single card (with only one copy of it in the game) and which may not even be included in the set of cards used in the first place! This is an extreme case of “chrome” - and yet - if zombies show up it can have a profound impact on the entire structure and flow of the game. Study in Emerald feels very sandbox-like in this regard. And while players don’t physically build a shared framework or structure in the game, the hidden roles (like Resistance) and created negotiation space (like Diplomacy) create a similar emergent framework feeling.

I played Pax Renaissance for the first time last night. What a gloriously beautiful mess. It exemplifies both this framework notion (tons of interaction over the map cards, but all via mostly shared assets) and the sandbox notion (tons of cards and inter-game variability, sudden and surprising victory, huge decision space). The game is absolutely a mess (and I should add that this brilliant reference card is a holy grail for helping ease the play). I loved my play of Pax Renaissance.

This got a bit longer than I intended, but hopefully it helps stir the pot of conversation on this topic a bit more. Please do share your thoughts on the matter and let’s see if we can find greater clarity or a common understanding of what a framework and/or sandbox game is and how they do or don't create compelling, interactive, and emergent play. Cheers! 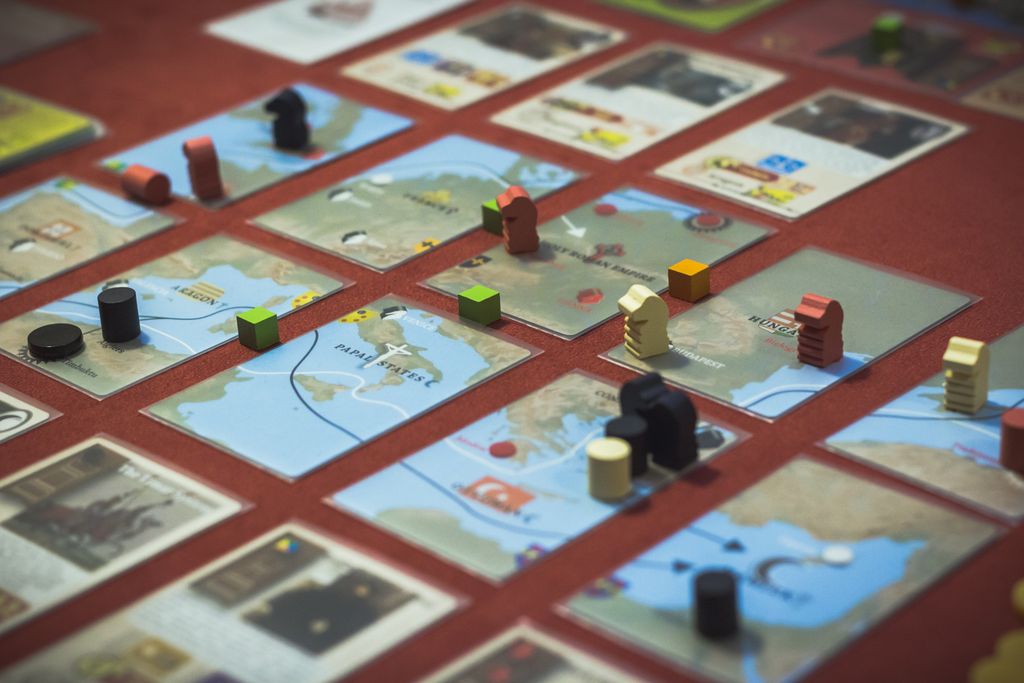