This post is going to be a bit of an outpouring of thoughts, stream of consciousness style.

This fall will mark 10-years that I’ve been part of the BGG community. But of course my gaming life - both video and tabletop - has gone on much longer than that (since the mid 80’s when I was a young lad). More significantly, this fall will mark 9 years since I started this blog. It’s remarkable because this has been one of the few constants in my “hobby” life. Games come and go, gaming groups come and go, … but this blog is always here. Even if I take long lapses in posting, I know that it’s quickly available when inspiration strikes!

My time on BGG has marked an era of sorts for me and my gaming however. Both the depth of conversation here with many of you all, the collectively hemming and hawing we all do over the games and ratings … and all of it … adds a certain formality to engaging in the hobby. The conversations have helped crystalize my own thinking more, and much of the critical analysis that I’ve seen has in turn inspired my own writings, my gaming preferences, and - more tangibly - my game design work.

I’ve been thinking more about my gaming preferences recently - in no small part due to the golden geek winners and the fury of conversation about the award process and how the awards do (or perhaps don’t) intersect with the trove of other data and information generated by BGG each and every day. While I don’t put much personal stock in the value of the Golden Geeks (they are a popularity contest which is decidedly anti-geek, right?), they and other awards nonetheless hold a mirror up to the community and let us reflect.

So reflect I shall! First of all, let’s talk about Wingspan. Wingspan is NOT my usual style of game. It’s a tableau engine-builder, with pretty minimal and indirect interaction. I like games in shared-spaces focused on spatial intersections with a high degree of contentious interaction and table-talking. But… my wife had a chance to play Wingspan with a co-worker and was super enthused about the game. What choice did I have? With xmas around the corner it seemed to be my destiny.

I’ve played probably 200 games of Wingspan since December 2019, almost all of it 2-player with my wife. While not my type of game, I’ve come to greatly appreciate the design and gameplay. Obviously it’s wonderful from an aesthetic standpoint - and I love that the theme is about something tangible and real world related (and not related to wars or political conflicts). One could use the game as a means of building their bird knowledge based on image recognition along. It’s great in that respect.

I don’t have a chance to play many games 100+ times, let alone 200+. What’s remarkable is that with a competent opponent almost any game can display a surprising amount of depth - especially when played in 2-player, head-to-head games. Wingpan has become more interesting as time goes on and our experience.grows. And perhaps most significantly, playing it in 2-player mode means that what minimal level of interaction there is, on the surface, becomes significantly magnified when playing hard to win.

There ARE mind games to play and calculated risks to make based on reading your opponent. Seeing a valuable set of resources in the bird feeder or cards in the display, and weighing whether to take them now versus first optimizing your board actions - at the risk of your opponent taking the goods instead! - is frequently a tough call that requires reading into your opponent. Likewise, with only 2-players, the fight over the end of round bonuses can be exacting, pitting players against each other in a tense race. Weave in card powers that leech off your opponent’s actions and well...it’s not really so different from Race for the Galaxy now is it? Which is, of course, another engine and tableau building game with indirect interaction whose depth profoundly opens up the more you play. 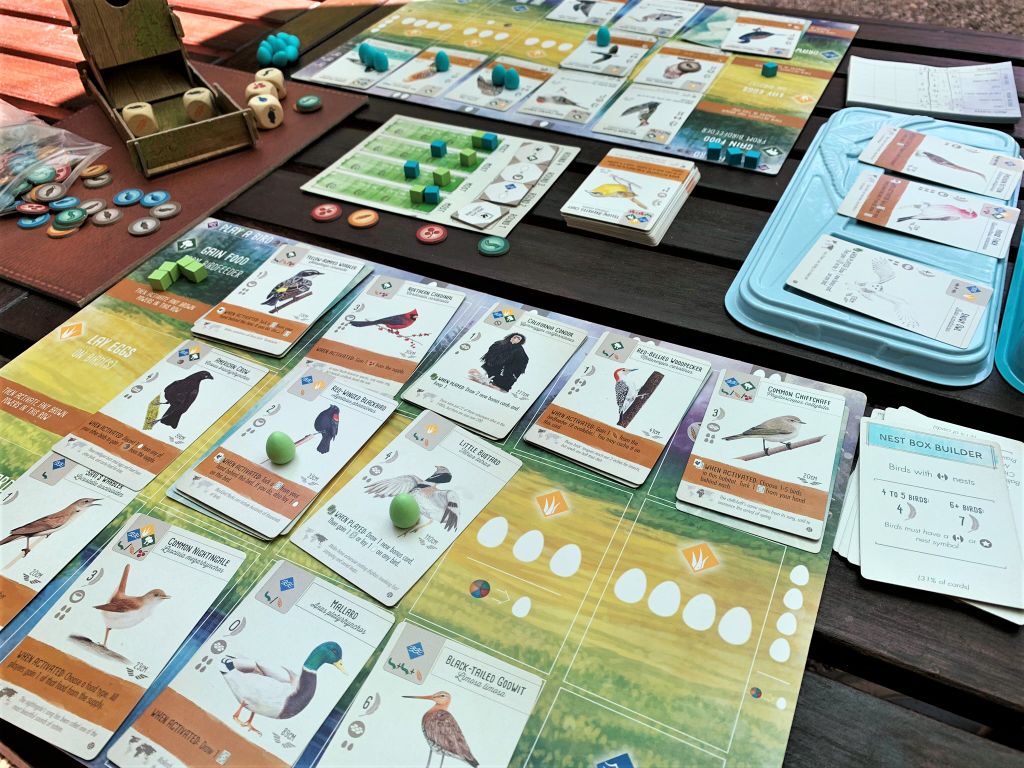 Wingspan’s weakest link lies in playing with more than 2-players. Each additional player either multiplies the game length or erodes the value of interaction and paying attention to your opponent by a comparable amount. This is a game that shines when played in 30-40 minutes. This is easy to achieve with 2-players but nearly impossible with more.

All this is to say that it’s no surprise to me that Wingspan is as successful as it has been. It fires on a number of cylinders. It has a unique aesthetic hook, an approachable theme (especially for people tired of the usual thematic tropes), and the gameplay deepens the more you play it.

Now, when it comes to the BGG Golden Geek awards, the debacle of Wingspan winning half of the categories - even seemingly contradictory ones - highlights two things: #1: The Golden Geeks are fundamentally a popularity contents, and #2: as far as organizing a popularity contest goes BGG fairled to uphold its namesake and inject some much needed geekiness into the process. It underscores how little care and value BGG admins seem to place on the trove of data and information in their very own database and in turn their resistance to using (and over time improving) the quality of that data for the community’s benefit.

This recent post looked back at 2017 game releases and used the BGG database to automatically determine the best games across a number of categories that can easily be drilled down using the data. Good or bad, the old sub-domain categories still exist and BGG users can vote on them - and there is an objective number of votes that determine what categories a game falls in. If a game is listed for multiple domains, looking at the numbers usually shows a clear lean towards one of the categories. Combine the domains with the weight ranges and other descriptors and we could auto generate a great set of nominees to then vote on.

But like the fading effort to rework the BGG database that was generating buzz last year, BGG admin seems thoroughly disinterested in making substantive improvements to the database and/or utilizing it in more inventive ways. For us data geeks, there are so many potential ways to use the data - and why not use the data generated itself to tell the story of BGG’s rising stars over the course of the year. Maybe, just maybe, we don’t even “need” an awards process - because we’ve all been involved in the “voting process” all year long through logging plays and rating games. This would be not only a more effective approach, but also a more genuine one that respects the contributions everyone makes to this site every day.

Preferences & The Pinwheel of Joy

All this talk of gaming preferences has me returning back frequently to something I’ve grown fond of using as a lens for evaluating games, understanding my preferences, and even as a design aid. Below (and BEHOLD!) is the Pinwheel of Joy. The basic idea of this was derived from the vastly more complicated looking Genomic Framework for game analysis, which was a magnum ops of sorts in my theorizing over games. The Pinwheel of Joy is a simplification of that framework, but captures the same basic idea. Players, rules, theme, and components come together to determine narrative, challenge, simulation, and immersion - which are the cornerstones of the total experience. 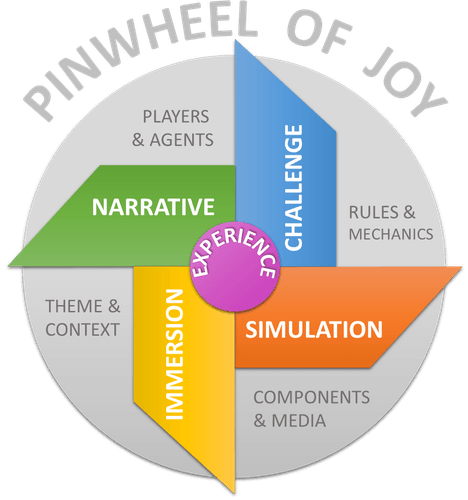 When I find myself asking the most basic of gaming questions - is game X fun? - the pinwheel of joy becomes a reference point. I can zero in to try and understand whether the pleasure I’m getting (or not getting) is based on whether the game delivers a deep challenge, or a compelling narrative, or gripping immersion, or provides a coherent simulation. This approach works in both directions if you will. I can use the pinwheel to understand what I hope to feel and experience from a given game, and then use it to evaluate the game and determine whether my expectations are satisfied or not. Thus, it lets me be more honest and effective in my critique.

The topic of preferences came to light in the follow up to my article about boardgames being better strategy games. While BGG showed general agreement with the gist of the article, on the other side of the fence (i.e. from the 4X video game perspective) the reactions were more varied with many in hearty disagreement. A few particular insightful replies remarked that for most 4X game players - as is likely the case for most videogame players overall - the importance of “challenge” in my pinwheel is likely lower than it is for most boardgamers.

People play video games oftentimes to “be entertained” in a more passive sense, even when playing heavier strategy games (like 4X games). In this case, the immersion and aesthetic experience, feeling like you are part of a narrative, etc, are more important than providing a hard challenge with tough consequential choices. Some games do the latter well, but most don’t place that as the first priority. Hence, this may explain why we see lackluster AI’s despite their being the capability for much stronger ones. The added challenge stronger AI’s would add to the game isn’t really demanded - and in fact may undermine the chill, relaxing tone the game is aiming for in the first place!

All of this resulted in an interesting set of observations about the differences between boardgamer attitudes and 4X gamer attitudes - and in turn might explain why developers are designing 4X videogames they way they are. Unfortunately for me, as someone who places challenge as the number one priority in what I desire from a 4X game, my experiences with most 4X games are lackluster - they just don’t end in a satisfying way like other proper “strategy games” do. But I’ve lamented and argued about this enough before so will spare you all from another rehashing.

On the continued topic of preferences, I wanted to share a thought I had about the BGG ratings. I’ve found it far better to view them not as a listing of the “best” games (with respect to BGG users), but rather as a slow-moving version of music charts (e.g. billboard top 40 and others). As such, they are a reflection of what is popular, liked, and/or highly rated “right now.”

The above point is something I’ve been trying to share and push, especially when talking to new players. It’s easy, I imagine, when starting out on the hobby to look at the rankings and think “these are the best to worst games” and not stop to ask the question about what your actual preferences are. The BGG ratings trend towards heavier and/or bigger games, and BGG overall tends more towards euro-y games, which may or may not align well with the average budding gamer wandering into the BGG ecosystem.

In winding down, I want to go back to where this post started. Despite my grievances about BGG (and most of these are in the form of missed opportunities rather than acute “problems”), at the end of the day this is a pretty amazing community filled with wonderful and insightful people. The relationships I’ve built here have lasted, and if there is one place on the internet that feels like “home” - it’s here. Thank you all for listening. More to come!